Homepage
SSS-MFMR
How to buy

Due to their unique geometry the tips of the are more susceptible to tip damage by electrostatic discharge (ESD) than other Silicon-SPM-Probes.

Electric fields near the probe chip may lead to field evaporation which can blunt the tip apex of the probe tip. Therefore the NANOSENSORS™ are shipped in specially designed ESD-safe chip carriers.

NANOSENSORS™ recommends to their customers to take appropriate precautions to avoid tip damage due to electrostatic discharge when handling the probes. This can for example be done by using anti-electrostatic mats, wrist bands and tweezers. 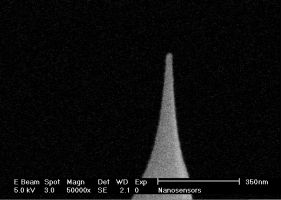 The NANOSENSORS™ SSS-MFMR AFM probe is optimized for high resolution magnetic force imaging. The SuperSharpSilicon™ AFM tip basis combined with a very thin hard magnetic coating result in an extremely small radius of the coated AFM tip and a high aspect ratio at the last few hundred nanometers of the AFM tip - the essential demands for high lateral resolution down to 20 nm in ambient conditions.

Due to the low magnetic moment of the AFM tip the sensitivity to magnetic forces is significantly decreased if compared to standard MFM probes but the disturbance of soft magnetic samples is also reduced.

The hard magnetic coating on the AFM tip is characterized by a coercivity of app. 125 Oe and a remanence magnetization of app. 80 emu/cm3 (these values were determined on a flat surface).