Homepage
PPP-LM-MFMR
How to buy 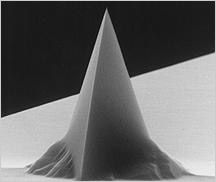 The NANOSENSORS™ PPP-LM-MFMR AFM probe is designed for magnetic force microscopy with reduced disturbance of the magnetic sample by the AFM tip and enhanced lateral resolution - compared to the standard PPP-MFMR probe. The force constant of this AFM probe type is specially tailored for magnetic force microscopy yielding high force sensitivity while simultaneously enabling tapping mode and lift mode operation.

The hard magnetic coating on the AFM tip is characterized by a coercivity of app. 250 Oe and a remanence magnetization of app. 150 emu/cm3 (these values were determined on a flat surface).