Homepage
PPP-EFM
How to buy

The new PointProbe® Plus (PPP) combines the well-known features of the proven PointProbe® series such as high application versatility and compatibility with most commercial SPMs with a more reproducible tip radius as well as a more defined tip shape. The minimized variation in tip shape provides more reproducible images.

The PPP-EFM probe is offered for electrostatic force microscopy. An overall metallic coating (PtIr5) on both sides of the cantilever increasing the electrical conductivity of the tip. The force constant of this type is specially tailored for the electrostatic force microscopy yielding very high force sensitivity while simultaneously enabling tapping mode and lift mode operation. 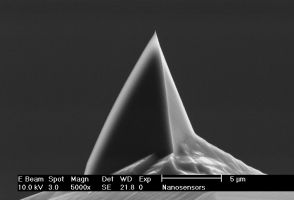 PointProbe Plus AFM tip side view